How To Buy The Best 4K Blu-ray player

Looking to buy the best 4K Blu-ray player? Check out our guide below and you’ll be well-placed to select the correct one for your needs.

Do you want to watch your favourite movies in stunning 4K?
These are the top 4K Blu-ray players currently available.

You might be wondering if a 4K Blu-ray player is necessary since that most streaming providers support 4K.
Netflix and Amazon Prime Video have gone a long way, but there is still a big difference in picture and sound quality between the latest 4K HDR discs and even the highest-quality streaming services.

Because of the convenience of 4K HDR streaming, 4K Blu-ray players have become more niche, but the improved quality alone makes them worthwhile.
Furthermore, when you buy a 4K Blu-ray disc, you know you’ll keep it forever, whereas streaming services regularly delete titles from their libraries.

How do you pick the best 4K UHD Blu-ray player for your needs?

This may seem self-evident, yet the playback resolution distinguishes the two.
A conventional Blu-ray player can only play Full HD (or FHD) discs with a resolution of 1,920 x 1,080 pixels, but 4K (aka UHD or Ultra HD) discs with a resolution of 3,840 x 2,160 pixels require a 4K Blu-ray player.
4K Blu-rays have four times the number of pixels as a regular Full HD disc, resulting in a huge boost in detail and colour accuracy, making images appear considerably sharper and polished.

Another significant distinction is HDR.
HDR metadata can be found on 4K Blu-ray discs, allowing you to make the most of your 4K HDR TV’s capabilities, resulting in brighter, more realistic, and powerful visuals.
Another advantage is greater colour gamut, which means movies can be recreated with a broader, more powerful colour palette.

Is a 4K TV required to watch 4K Blu-rays?

Is it possible to watch a conventional Blu-ray disc on a 4K Blu-ray player?

Yes, 4K Blu-ray players offer extensive backwards compatibility, allowing you to continue to enjoy your existing collection.
4K Blu-ray players can play regular Blu-ray discs, DVDs, and CDs in addition to 4K Blu-ray discs.
In reality, thanks to the magic of upscaling, a process in which a video with a lower quality, such as Full HD (1080p), gets upconverted to a higher resolution, your normal Blu-ray movies may wind up appearing even better than before when played on a 4K Blu-ray player.
The upscaled version won’t look as good as a native 4K Blu-ray, but it means you won’t have to start over with your movie library.

What is High Dynamic Range (HDR) and why is it important?

HDR (High Dynamic Variety) is a set of standards that allows TVs to display more lifelike images with brighter highlights, deeper black tones, and a far wider range of colours, to put it simply – perhaps too simply.
Consider a movie scene in which a candle is lit in a gloomy room: with the correct home cinema setup, HDR allows the TV to more authentically represent the flame’s scorching brilliance and rich colours, while simultaneously exhibiting the subtlest details in the image’s shadowy, inky black corners.

The vast majority of 4K TVs on the market today support HDR, and every model we suggest in our top 4K TV list does.
However, not all HDR-capable televisions are created equal.
Cheaper versions, for example, lack the contrast, brightness, and colour depth required to display HDR content at its best.
Furthermore, even if the TV is capable, they may lack the software and processing capability to make the maximum use of the material.

There isn’t just one HDR format, as there never is with TV technology.
Some are open-source, which means that anybody can use them, while others, like as Dolby Vision, require a licence from a specific firm.
If you’re looking to acquire a 4K Blu-ray player or a 4K TV, here’s a list of HDR formats to be aware of right now:

HDR10 is the most widespread and fundamental HDR format.
Most 4K Blu-ray players and 4K TVs, including many affordable models, support it.
Netflix, Disney Plus, and Amazon Prime Video, among others, employ it in some of their streaming offerings.

HDR10+ is an HDR10 enhancement that allows you to fine-tune how images are shown on your TV by dynamically adjusting the brightness levels of the screen frame by frame (or scene by scene).
It’s especially effective for maximising the HDR potential of lower-cost and mid-range Ultra HD televisions.

Like HDR10+, Dolby Vision uses dynamic metadata to optimise content playing as it changes.
It is the best HDR format in terms of future-proofing because it can offer a higher colour bit-depth and peak brightness than HDR10+.

The BBC and Japan’s NHK created HLG, or Hybrid Log-Gamma, as an HDR standard for transmission.
HLG content is still quite restricted as of 2021, and even then just in streamable form.
Consumers will have to wait a long before seeing live HLG broadcasts.

If you want to learn more about the different formats and how they function, check out our article What is HDR TV? for an in-depth look at everything HDR.

What audio formats should I keep my eyes peeled for?

A 4K Blu-ray player – or indeed any home cinema device – may support a staggering variety of various surround sound formats.
You may come across formats such as Dolby Digital, Dolby TrueHD, DTS HD Master Audio, Dolby Atmos, and DTS:X.

The good news is that the Blu-ray player isn’t the bottleneck in this case.
Most of the time, you’ll want to choose the bitstream option, which sends the unmodified digital audio stream to a device further down the chain, such as a soundbar or a compatible home cinema amplifier.

If you wish to use the player’s analogue audio outputs or output audio via optical or coaxial S/PDIF (rather than HDMI) to a device that can’t decode surround sound audio, you only need to worry about audio format support.
However, because S/PDIF has less bandwidth for audio signals than HDMI, you will lose some audio quality in this instance.

High-bandwidth
HDCP 2.2 is the current standard that must be satisfied for 4K UHD video. Digital Information Protection (HDCP) is a technique meant to prevent consumers from unlawfully copying content.
To watch a 4K UHD Blu-ray, make sure all of your devices in the chain are HDCP 2.2 compatible.
If one of them isn’t, like your TV or soundbar, you won’t be able to watch the movie at its highest resolution.
HDCP 2.2 is probably not a big deal; it’s been around for a while, so unless your equipment is particularly old, it shouldn’t be a problem.

What about HDMI, for example?
HDMI 2.1 is the most recent version of the HDMI standard, however HDMI 2.0 is still the most widely utilised – at least for now.
HDMI 2.0 introduced a few new functions that are critical to your viewing pleasure:
4K frame rates of 50Hz and 60Hz; 10-bit and 12-bit colour depths; up to 32 channel audio at 1,536kHz sample rates; and dual-video streams for split-screen viewing are all available.

If you want to watch 4K HDR video, make sure your TV and 4K Blu-ray player both have an HDMI 2.0 connector — and no, you don’t need to buy an expensive cable; just one that is HDMI 2.0 compliant will suffice.

The best 4K Blu-ray players you can buy 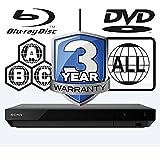 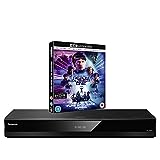 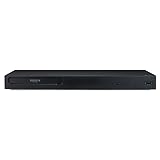