How To Buy The Best carbon monoxide alarm

Looking to buy the best carbon monoxide alarm? Check out our guide below and you’ll be well-placed to select the correct one for your needs.

Everyone understands the importance of having a smoke alarm in their home.
If a fire starts while you’re sleeping, the smoke will trigger an alarm, allowing you enough time to escape before being asphyxiated by the fire’s lethal mixture of chemical chemicals.

But there’s another gas that you can’t see, smell, or taste, and it’s potentially far more lethal.
Carbon monoxide is formed when fuels are burned incompletely, which is commonly due to a malfunctioning item such as a gas boiler, gas-powered fireplace, gas cooktop, wood burner, or a blocked coal fire flue.

Thankfully, a carbon monoxide detector, which costs only a few pounds more than a smoke alarm, can provide early warning.

How do you pick the best carbon monoxide detector for you?

What is carbon monoxide poisoning, and how does it happen?

Because you can’t smell, taste, or sight carbon monoxide, it’s known as the silent killer.
It invades red blood cells (haemoglobin) once it enters your bloodstream, preventing them from transporting oxygen across the body.
Carbon monoxide poisoning can cause a flu-like headache, dizziness, and nausea, as well as fatigue, confusion, dyspnea, weakness, lack of muscular coordination, and, dare I say it, death.
CO is odourless to the point where even dogs are unable to detect it.

What are carbon monoxide alarms and how do they work?

Carbon monoxide sensors have a five- to seven-year lifespan, while some manufacturers currently claim that their sensors may survive up to ten years.
In general, it’s better to be safe and replace your alarm a year or two before it’s intended to stop working.
Alarms that are more than eight years old have been shown to fail to detect Carbon monoxide at levels exceeding 400ppm in tests conducted in the United States.

It’s also worth mentioning that the test button on these devices doesn’t truly test the sensor; instead, it double-checks that the circuit is operational.

What CO levels are deemed hazardous?

Most people will not suffer any symptoms if they are exposed to Carbon monoxide levels below 40ppm for an extended period of time.
The real risk level begins at roughly 400ppm, depending on the period of exposure (two to three hours of exposure at this level can be life-threatening).
To give you an idea of how hazardous higher concentrations can be, 1,500ppm can kill you in an hour and 6,000ppm can kill you in 15 minutes.

All of these concentrations are terrible enough when you’re awake and realise something isn’t quite right – especially if others are experiencing the same thing – but if you’re sleeping, you can wake up with a strong headache and nausea, unable to crawl for fresh air.

Worse yet, you may not even wake up.

What makes you think I should be concerned?

According to the NHS, 25 people die in the UK each year as a result of Carbon monoxide poisoning.
It’s a good idea to have the flue of your boiler, gas fire, or wood/coal fire examined at regular intervals for extra piece of mind.
Inside a tent, never use a gas-powered lamp or oven.

Where should I put my Carbon Monoxide detector?

Most manufacturers recommend placing your alarm next to or near a gas appliance, and it’s also a good idea to keep one near any fire or wood-burning stove.
Most can be installed on a workbench, shelf, or table – or simply mounted on the wall – and should be roughly 1.5m from the ground and at least 30cm away from any ceiling.

Do not believe that Carbon Monoxide alarms are only for your home.
They’re required for caravans and motorhomes, and you might wish to bring one with you on vacation if you’re staying in a cottage or other self-catering property.

Are there any features that you should keep an eye out for?

Carbon monoxide alarms are, in general, quite simple devices.
Only the newer, higher-priced smart or app-connected alarms have any useful functions.
British Standard certification is the most crucial item to search for.
Carbon monoxide alarms shall be EN50291-1:2018 kitemarked for use in domestic premises, and BS EN 50291-2:2010 kitemarked for use in the home, boat, or caravan.
The second standard primarily assures that the alarm is durable enough to be used when travelling.

Aside from that, the most important aspects are whether or not there is a display and how the alarm is powered.
A rising number of Carbon monoxide alarms now have a display that shows the sensor’s current reading on CO particles in the air, albeit you’ll only see it after a test or if the reading exceeds acceptable levels to preserve batteries.

Most Carbon monoxide alarms used to be powered by a set of replaceable AA or AAA batteries, which needed to be replaced every three to five years.
Many now use a sealed-in Lithium battery that is meant to last the same amount of time as the sensor; you simply buy the unit and replace it when the lifespan expires.
If there is a carbon-fueled appliance on the property, such as a boiler, woodburner, or open fire, a new Scottish law will force homeowners and landlords to install either tamper-proof detectors with a long-life Lithium battery or a mains-wired CO alarm starting in 2022. 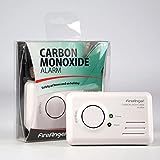 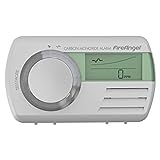 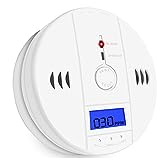 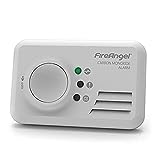 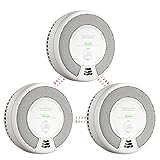 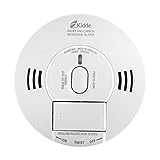