The DJI Mavic Mini is the epitome of a “take anywhere” drone.
It folds up into the palm of your hand and weighs just 249g (just under half a pound), so it won’t take up much room in your pack, wallet, or bag. It’s even smaller than its own controller, making it incredibly travel-friendly.
It also falls below the 250g weight limit that several countries use to need drone registration.

Despite its compact size, the Mavic Mini can travel at a top speed of 47 kilometres per hour (29 miles per hour) in Sport mode, albeit its light weight will be noticeable in high winds.
In exchange for its tiny size, it foregoes some functions, most notably obstacle sensors and an obstacle avoidance system, instead relying on two downward-facing visual positions that help when GPS signal is patchy.
The Mavic Mini, on the other hand, boasts a battery life of 30 minutes, which is excellent for such a small device.

The camera employs a 24mm equivalent lens with a fixed F2.8 aperture and is designed around a 1/2.3” CMOS sensor.
Despite its diminutive size, the Mavic Mini is equipped with a 3-axis gimbal for smooth, stable filming.
Because the camera doesn’t enable Raw image capture, you’ll have to stick to Jpeg-only photography.
Given that it’s an entry-level model, this isn’t a major oversight.

The H.264 codec may capture video at a maximum resolution of 2.7K/30p or 1080/60p.
Although not as high as the 4K recording found on many models, it’s plenty of resolution for casual use like posting vacation escapades on social media, and the 2.7K footage looks great on a 4K display, however the video bit rate is limited to only 40 Mbps.
In short, video quality is adequate, but demanding shooters will most likely require more advanced specifications.

The remote controller for the Mavic Mini is similar to those on older Mavic series drones.
The phone is attached beneath the joysticks, while the power and home buttons are located above the front interface.

The range of Wi-Fi transmission is limited to 4 kilometres (2.5 miles).
Some of DJI’s most popular Intelligent Flight settings, like as ActiveTrack and Waypoints, are noticeably absent.
There are QuickShot modes like ‘dronie’ and ‘rocket.’

The Mavic Mini is an excellent pick if you’re searching for a basic entry-level drone that can also fly indoors.
Professionals, on the other hand, should avoid this sub-250g drone unless they want something to play with.
Because of its low weight, the Mavic Mini does not require FAA registration, but it must still adhere to all local rules. 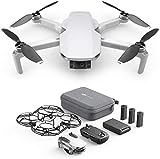 Honest Bob is committed to providing genuine reviews from a panel of experts. As an Amazon affiliate Honest Bob earns commission from any qualifying purchases.Thank you for your support!

What to Expect When Participating in Drone Racing