Depending on the style, beer boot glasses are either mouth blown or machine pressed. The real difference is in the location of where the seam is terminated.

If the seam runs straight down the middle of the boot, splitting it in half, the boot has been machine pressed, and this is the case. This means that two half boot moulds were formed and pressed together by a machine to create the final product. A mouth blown boot has a seam that runs down the sides of the boot’s length, from top to bottom.

Seamless mouth blown boots have no seams at the toe, which is because it is only this part of the boot that is truly “mouth blown,” with the glassmaker blowing air directly into the molten glass after it has been placed in a mould.

Because they are made by hand and are subject to human inconsistencies, mouth blown beer boots are more delicate than machine pressed beer boots.

History of the beer boot glass

Beer boots were invented in Germany, where they are referred to as “Bierstiefel,” though there are a variety of historical explanations for their origin.

Beer boots have a long and illustrious history that begins with the German military at the beginning of the twentieth century.

Although the veracity of such claims, as with many “traditional” and informal sources, is questionable, the tradition itself does have a cultural origin.

According to one legend, a Prussian general made a promise to his troops that he would drink beer from his boot if his troops were victorious in a forthcoming battle.

In order to fulfil his promise without “having to taste his own feet,” the general ordered a glass in the shape of a boot when he was victorious.

The beer boot, according to another legend, originated during World War I, when German soldiers, who had no other vessel to drink from, passed around a real leather boot filled with beer before heading into battle. They would flick the boot before drinking from it to wish the next soldier good luck, and they would flick it again after drinking to wish the next soldier better luck.

The following are the differences between various beer boots:

Mouth Blown Beer Boots. The European-made mouth-blown beer boot was the starting point for everything. Each pair of mouth blown beer boots is individually handcrafted by highly skilled artisan glass makers in the finest glass factories in Germany, Austria, and Poland.

However, as with any handcrafted item, it is perfectly normal to find minor anomalies such as air bubbles and ridges in the glass. Mouth blown boots are of heirloom quality, despite the fact that they are made of glass. Mouth blown beer boots are extremely delicate, and the greatest amount of caution should be exercised when handling them.

How to Drink from a Beer Boot

The film Beerfest popularised the theory that “the secret” to drinking out of a beer boot is to point the toe sideways when doing so is. The toe of the beer boot develops an air pocket as the beer is consumed from the boot. In order to avoid spilling all over the drinker, this air pocket must be carefully released, and the standard trick is to hold the boot so that the toes point to either side horizontally.

While this will undoubtedly help to prevent beer from spilling all over the drinker, we will leave it up to you to decide how to drink your beer boot, as some people prefer the added challenge of “toe up” rules to drinking from a boot.

When choosing which beer boot to purchase, the following are the most important factors to consider:

The Best Beer Boots To Buy 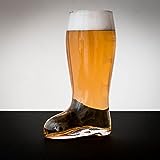 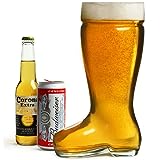 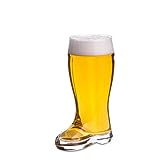 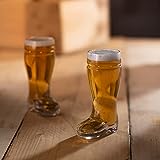 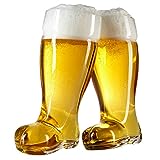 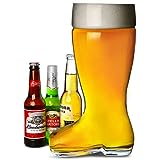 How To Drink From A Boot Beer Glass